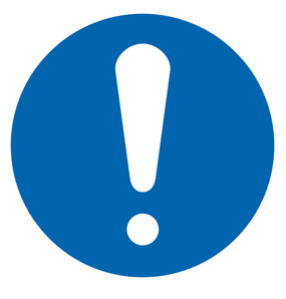 Please click the relevant flowchart box to be taken directly to textual information. 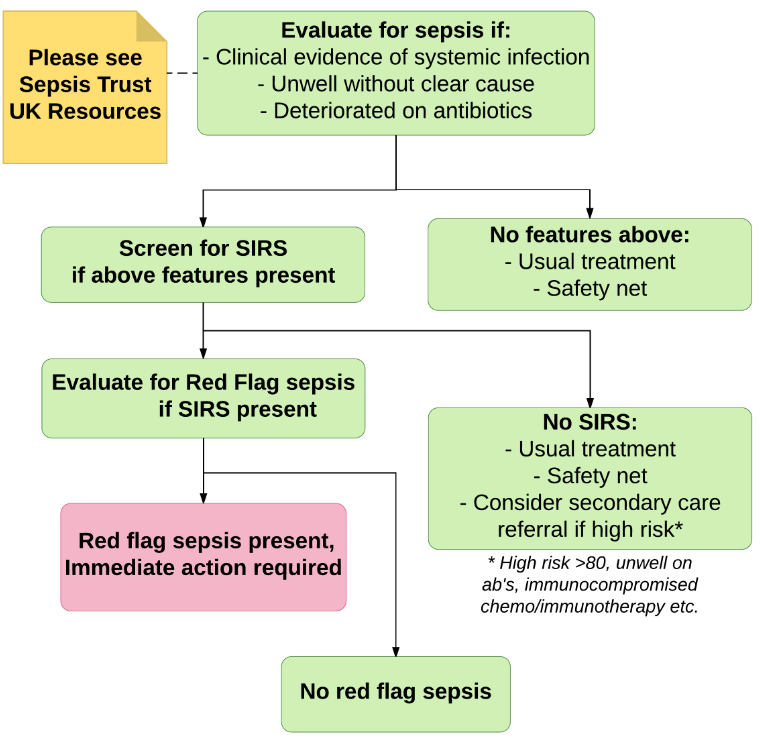 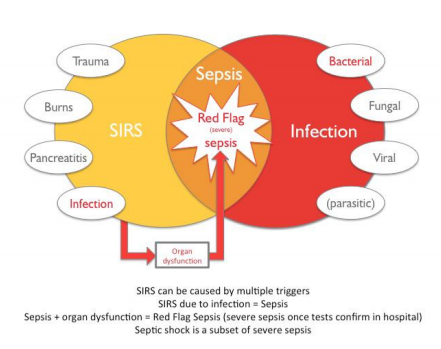 SIRS is present if there are least 2 of:

Box 2:  Defining the severity of sepsis

A useful link with information in recognising sepsis in children can be found here.

Our understanding of patients with sepsis has changed: we are now aware of how common it is and that it can arise from common infections such as pneumonia, UTIs, cellulitis and abdominal conditions amongst other sources. Crucially we also know that early identification, prioritisation and treatment really can improve patient outcomes, although we also know how difficult it can be to recongise and prioritise patients, particularly in the community, where we can only rely on clinical acumen.

In Gloucestershire, we have a number of tools to support front line clinicial decision making. Key to this in the National Early Warning Scores (NEWS) which is being adopted across our system as an adjunct to clinical decision making, helpling to prioritise the urgency to a patient's care.

Act immediately if ANY ONE of the following are present:

Action for patients with Red Flag Sepsis
For patients identified with Red Flag Sepsis, immediate arrangement should be made for urgent transfer for hospital assessment. This should be by ‘blue light’ ambulance with a Paramedic crew. A brief, clear handover should accompany the patient to include observations, any relevant medical history and antibiotic history including allergies.

A priority both nationally and locally is raising an awareness of sepsis.

GPs will recall from time spent in A&E how quickly someone can deteriorate with sepsis and this is often still thought of as a secondary care issue. However, there is growing awareness that early sepsis is probably under-recognised in primary care, with over 70% of cases arising in the community. Rather than the classic meningococcal septicaemia, these may be older people who are 'off legs' with a UTI, pneumonia or cellulitis and who have early sepsis with less immediately obvious signs of critical illness. Some people in this group may be identified and prioritised earlier through greater awareness and targeted clinical assessment.

A stage 2 alert has been issued to continue to raise awareness of sepsis and to signpost clinicians  to a set of resources developed by the UK Sepsis Trust, and others, to support the prompt recognition and initiation of treatments for all patients suspected of having sepsis. These resources include the Sepsis 6, a care bundle whose use is associated with significant numbers of lives saved and reduced length of hospital stays.

Please select the images below for printable posters/cards. 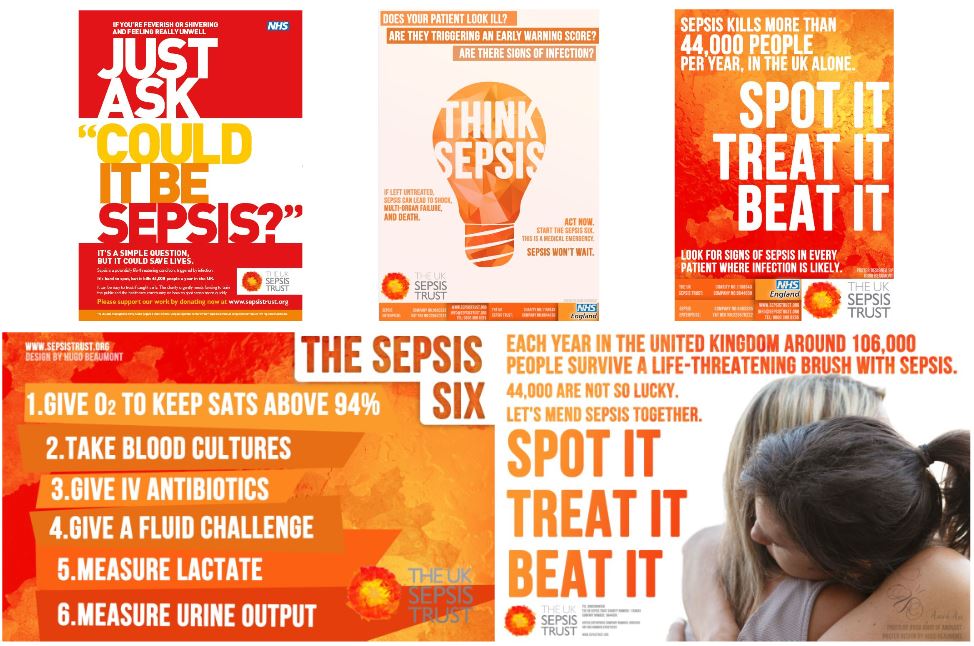 Please follow the Resource link below which will take you to the further resources and the toolkit.

Suggested clinical guidelines for the management of patients attending with sepsis in Primary Care -  Sepsis (no Red Flag signs):

• If to be treated in the community, arrangements to be made for review within 24 hours

• If to be referred for hospital assessment, handover including relevant clinical history and antibiotic history including allergies to be provided